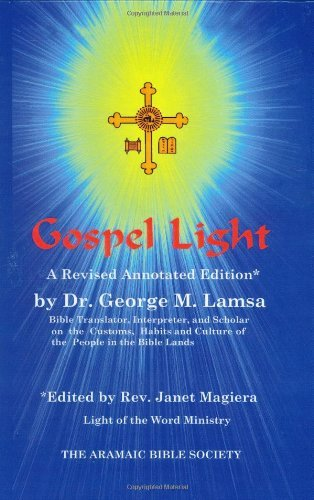 This extensive work by the Middle Easterner George M. Lamsa, who grew up in the same region as YAHUSHUA as well as having been taught all the customs and traditions of this people himself, tells of how much of what is written in today's Bible has been completely mistranslated. Instead of having a Middle Easterner translate the Bible, where an exact translation of many phrases that we Europeans do not understand at all would have been interpreted in an understandable way, the Bible was translated in a European way and the pictorial language of the Middle East was completely distorted. We do not understand many things in the Bible, because we do not understand the customs and idioms that are common practice there. It would go beyond the scope here to set up examples, the entire work must be read for this to fully understand.

One thing, however, should be noted as an example:

Regarding YAHUSHUA's sentence on the cross, "Eli, Eli, lema sabachtani?" which is rendered in English as, "My God, my God, why have you forsaken me?", explain the following:

"Eli" is the Aramaic word for God. "Lema" or "lmana" can mean "what a thing!" or "for what purpose!". It is not so much a question (or a reproach to God) as it is an exclamation of wonder at something awesome. The word "sabachtani" or "shbakthani" is based on the root "shbak". This verb carries the meanings: to keep, to remain, to save up. It is here in the 1st person singular, as indicated by the "i" at the end. We find this word in the Aramaic text, for example, in the 1st book of Kings (19:18), "The Lord answered: I will leave seven thousand in Israel, all whose knees have not bowed to Baal and whose mouths have not kissed him." These remnant are those whom God will save. They are not forsaken, but rather saved for salvation; they are preserved from disaster. If one wanted to say in Aramaic, "I have been forsaken," there would be two more appropriate words for it than "shbakthani." On the one hand it could be called derived from the root "taa": "taatani". "Taa" means "faithlessly abandoned, abandoned, forgotten". We find the word in Psalm 13 (v. 2), among others: "How long, Lord, do you forget me completely? How long will you hide your face from me?" Or, on the other hand, derived from the stem "nasha", one could say: "nashatani", with the meaning: "to give away, to forget, to neglect". Thus used in the Book of Genesis (41:51), "Joseph called the firstborn Manasseh (forgetfulness), for he said, 'God has made me forget all my care and all my father's house.'"[43] Seen in this light, YAHUSHUA merely exclaimed victoriously that his destiny had been fulfilled. This was never meant as an accusation of God that He had abandoned Him!

Also the work "The Syrian Christ" of Abraham M. Rihbany lights up the life in the Near East where YAHUSHUA grew up and clarifies understandably what it has to do with all the many idioms which were wrongly transferred into German. In the Near East there is a lot of figurative language "thrown around" and very often exaggerated. Thus, for example, with the miraculous bread multiplication YAHUSHUAs instead of the 5000 people possibly only 100 were present. The Middle Easterner exaggerates gladly, this however not from bad reason, but because the details do not interest him, but rather the event. We Europeans, however, want the details and "get hung up on them", even though they may never have taken place. Our understanding of the Middle East and the way the people there speak and talked as well as their customs and traditions are foreign to us and therefore the Bible is for the most part incomprehensible. But for the people of the Middle East, the Bible is only logical because it was written the way people lived then and in that part of the world still do after thousands of years. They continue to live like the people in the Bible and they continue to keep all the customs, many of them even still speak Aramaic, the mother tongue of the Messiah!

To understand YAHUSHUA and his way of speaking and parables, the book of George M. Lamsa (as well as his book "New Testament Origin") is highly recommended as well as that of Abraham M. Rihbany and several more, which reveal the incomprehensible Near Eastern world of YAHUSHUA and explain it for us Europeans.